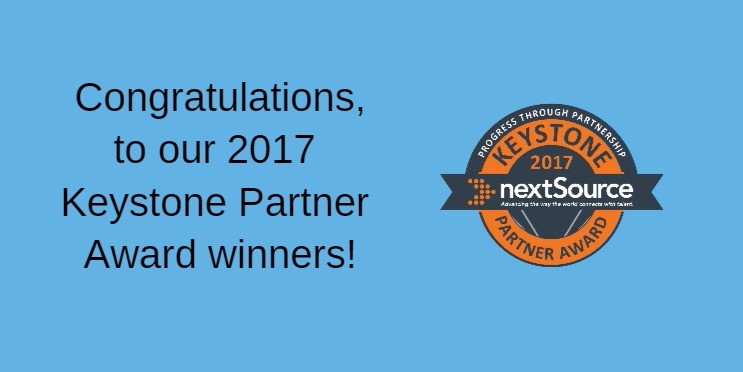 Last week, nextSource announced the winners of this year’s Keystone Partner Awards. This program recognizes those suppliers demonstrating the highest levels of customer engagement and the capacity to deliver the best quality talent. Named for the central building block situated at the summit of an arch which locks the whole arch structure together, the Keystone Partner Award is bestowed upon top performing suppliers without whom, workforce management structures would lack the critical cohesion needed for success.

This is the first year nextSource has formally recognized its top-performing suppliers in the annual awards program. The Keystone Partner Awards give customers great insight into the traits of best-in-class suppliers and help customers better understand what to look for in a supplier partner.

nextSource customers can leverage the competitive research put into this award in a number of ways. From a high level, the award help customers to recognize the top performing suppliers feeding talent to all nextSource programs. The increased business these top performers may experience as a result of this recognition should serve to further enrich suppliers’ ability to improve service to all nextSource MSPs. The opportunity presented by earning this award also serves to incentivize the entire supplier community to meet and exceed SLAs and thereby nurture more business referrals.

Suppliers serving nextSource programs can achieve the Keystone status, putting themselves at the critical center of business activity by observing the following guidelines for potential inclusion in future awards.

A Focus on Performance

Keystone Supplier Award winners are evaluated against all suppliers supporting nextSource enterprise wide with metrics based on quality, compliance, cost and speed. Quality and compliance are weighted most heavily with metrics for the ratio of candidates submitted versus those hired. Both the VMS Accelerators and the Staffing Industry Analysts cite this metric as one of the standard measurements staffing firms must use as an internal benchmark.

A Focus on Compliance

Keystone Supplier Award winners score highly with respect to the compliance metrics included in nextSource scorecards. Compliance is heavily weighted as a factor and is judged according to three components: 1) compliance with insurances, 2) compliance with onboarding requirements and 3) compliance with program guidelines.

Suppliers faltering in any of these areas should be excluded from participation in any MSP program. Whereas those performing at the highest level against these requirements facilitate increased and effective adoption within the programs they serve.

A Focus on Mutual Success

Keystone Award winning partners invest significant time and resources into burnishing their relationship with nextSource. Demonstrating a vested interest in ensuring the success not only of themselves, but of the nextSource MSP programs they serve is crucial to earning this coveted recognition.

Sometimes, when incumbent suppliers are enrolled, they focus on the impact to their own business and may de-emphasize the objective of the customer. Award-winning suppliers already have a proven track record of achieving client objectives like visibility and cost savings and are ready from Day 1 to keep the focus on the customer.

Every client is different, and therefore any new suppliers will benefit from some coaching on how to be most successful in the program. Suppliers invested in the mutual success of the program have proven their objectivity and openness to coaching from nextSource in pursuit of program success.

nextSource is proud to announce this Keystone Partner Awards. Please join us in offering congratulations to each of the recognized suppliers. Like the award’s namesake, these partners are acclaimed for their outsize role in bearing the essential load of our programs and holding up the structure of the modern American workforce.